We have a passion for fragrant flowers and is trying to establish a walkway with fragrant plants such that a walk (especially in the evening) through the garden will have different floral fragrances hitting you from all directions.

I have already mentioned the fabulous Queen of the Night or Night Blooming Jasmine. Other favourite fragrant plants are the various varieties of ShuMei or Wrightia Religiosa. 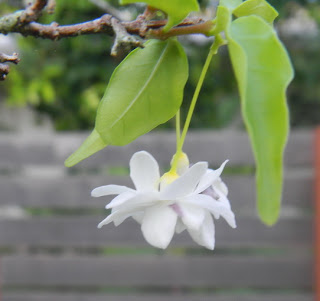 There is an interesting story behind this particular plant.

In 1986, when we were staying in Yishun, Singapore, we attended a series of Bonsai classes at the Braddell Heights Community Centre in Singapore. The "sifu" was Mr Boh Chit Hee. A knowledgeable and helpful man, he taught us on how to create bonsai over a period of eight weeks . He started us from the basics of bonsai and provided plenty of cuttings of Wrightia Religiosa for us to practise marcotting and to create bonsai of various styles. We all end up with pots and pots of bonsai!

It was on a working-visit to his famed garden (Straits Times called it magical) in Changi that I saw a huge bush of Wrightia Religiosa "Double" at the front of his garden. I asked for and received a few marcots. These were planted in the back patio of the flat in Yishun, alongside the many pots of new bonsai. They all did well!

In 1991, all the plants were taken out of the pots, washed free of the soil and carted off to our new garden in Petaling Jaya, Malaysia. Some died but enough of the bonsai survived, as did one of the Wrightia Religiosa "Double". This plant was planted right in the front garden underneath the front bedroom windows. By 2008, it had grown into a bush some 3.5 m tall - providing regularly a profusion of flowers that scented the air - and a very pleasant fragrance when one opens the front bedroom windows. 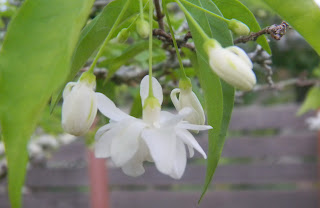 At the beginning of 2005, an off-shoot of the Wrightia Religiosa "Double" was taken back to Kuching and planted at the front of a 1200 square metres piece of land intended for a future house. In June 2006, the same plant, now 1 m feet tall, was dug up and transferred to the garden of my 4th sister in Poh Kwong park, Kuching in case it was damaged by earth-fillings on the site. By October 2007, a new house was under construction.

The new house was competed by October 2008. That December, the now 1.5 m Wrightia Religiosa "Double" at my 4th sister garden was dug up and replanted in its permanent home in the garden here 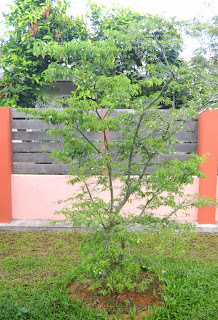 It had been moved from Singapore to Selangor and then Sarawak and had been dug up and replanted many times over a period of some 22 years.

There - it is not a great looking plant (not yet!) - but is certainly of great sentimental value!!


It should be noted that many of the original bonsai created at the Braddell Heights bonsai classes in 1986 are still doing well today in the garden.

A COLLECTION of 51 bonsai plants which is almost half-a-century old is now sitting pretty at the Shanghai Botanical Gardens. Mr Boh Chit Hee, 67, who started growing the plants when he was a teenager, gave them to the gardens there after the Singapore Botanic Gardens turned down his bequest.
Posted by My Garden at 2:07 PM