I do have a few plants in the garden; the flowers of which are pretty small and not particularly attractive. However, their attraction are in the nice ornamental beautiful fruits that they produce. 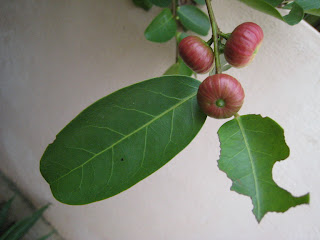 This plant was sown from seeds taken from a bush I saw along the fence of an abandoned house. I had to go back a few times before I was able to retrieve some ripened seeds. It then took me three tries at germinating the seeds before the seedlings appeared after about a couple of months! As the original bush was quite big and pretty wild, I did not really want to plant it in the ground. So I had three seedlings transplanted to pots.

I was unable to identify the plant until I asked in the Green Culture Singapore Forum and got an answer pretty fast from one reader called AhSeng. According to him, it is the Glochidion littorale. I use this tip to get more information on this plant from here which said that it has several local names - Monkey Apple, Ubah, Jambu kera , Selunsor, Hujan panas, or Daun san sik. The plant has both male and female flowers - something which escape me when I looked at the tiny flowers (c 2-3mm) before! Now I know. 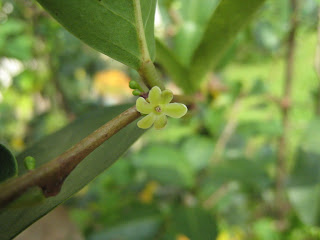 The open flower is the female flower while the little knobs seen near it are the male flowers. 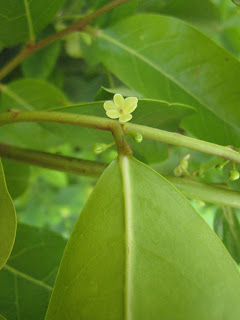 The new fruits are green and are of varying sizes. 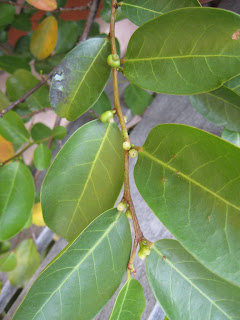 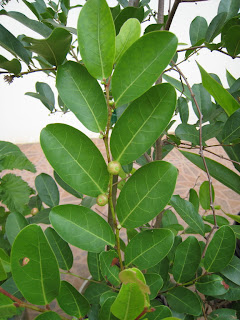 Each of the fruits is about 15-20mm in size and the colour changes to pinkish-to-red as they ripen. 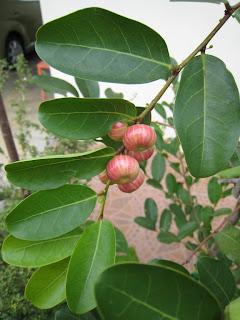 Look at the colorful fruits - they remind me of a sweet that we used to eat as children. 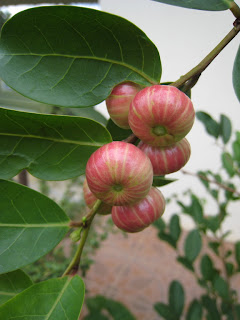 The ornamental fruits looks even more spectacular once the fruit ripens and the skin of the fruit dries up to expose the bright orange-red seeds - it clearly shows that the fruits are segmented with one seed in each segment. 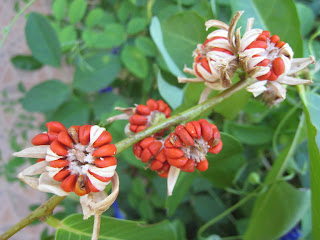 As an aside, apparently the young red leaves are edible :-)
Posted by My Garden at 5:34 PM