A Most Unwelcome Visitor ....

... to our garden and the strange mysteries of the disappearance of our five cats over the last year or so may have been solved!
On Friday, TK got up early and went to the shed at the back of our garden to get some gardening tools. The grey striped cat was there at the back of the garden. He then looked for the calico that we kept in the cage at the back garden. This calico was 5 months old and from my sister-in-law's mother. We just got it about 3 weeks ago and it was just getting used to us and our garden. TK could not see the calico cat in the cage and then, to his horror, saw this ...... 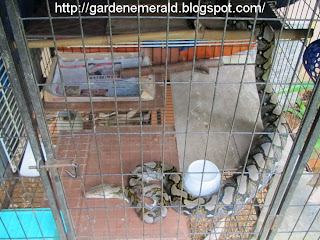 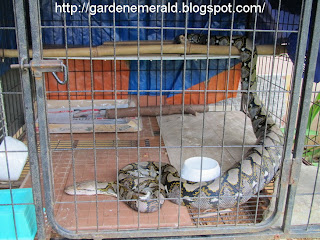 Obviously, the python had eaten our calico cat - judging from the bulge in the middle section of the snake. TK then called all of us (my niece, mum, her maid and I) to look at the snake. My two nephews and sister-in-law also joined us. Looks like the python squeezed through the wire netting, ate the cat but got trapped inside as, with the meal of a cat inside, it cannot leave the cage! 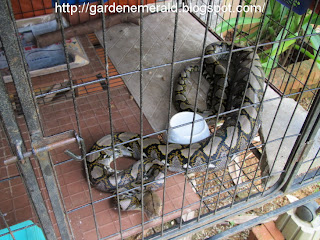 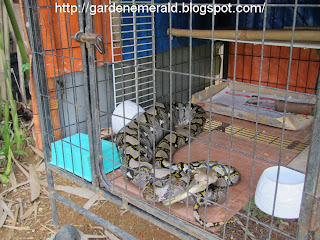 I called 911 and when told of a snake, the call was transferred to the Malaysian Civil Defence Force. They immediately sent a team of four to catch the snake. 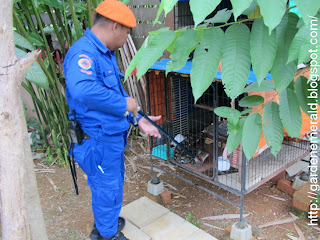 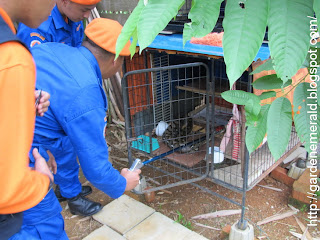 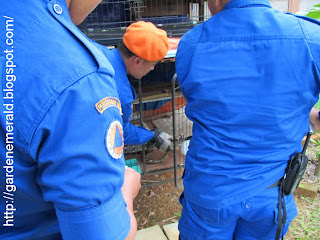 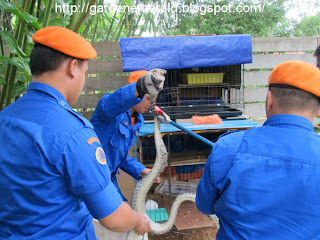 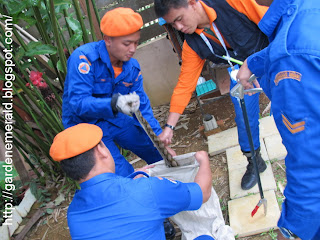 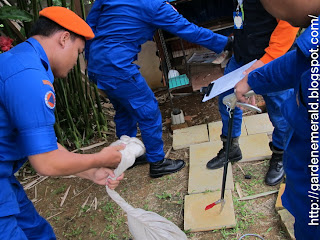 It was all over in minutes. I was told that they will release the python at a forest reserve.
Just behind our house is a large bamboo thicket and it is quite common to find snakes living in this type of garden growth. We had previously seen a 60-cm long green grass(?) snake in our garden but it was just like a long thin rope of about 2-3 mm!
Until we saw the python, we could not understand how five of our cats/kittens had disappeared over the last year or so! This 2-metre long python certainly could have been eating our cats! We are now down to one cat! According to the guys, there may be another snake in the vicinity as usually there may be a pair nesting in the same area. We have been told to watch out for it!
Well, no more wandering near the bamboo thicket at night!!
Posted by My Garden at 12:23 PM