The kuini tree (local variety of mango, Mangifera odorata) in the garden of our old house is fruiting again. 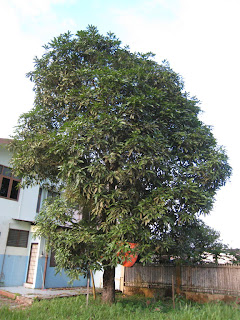 The tree was planted by my parents in 1980 and is now some 40 feet tall - trunk circumference is about 1.4m (55"). There were two before but one was felled by termites about 10 years ago. When I briefly stayed at the house in between returning from the UK and then leaving to work in Singapore (1982), I used to hear through the night the "boom" sounds from the the kuini fruits dropping onto the galvanised roof of the extended kitchen! The house had been empty since 1990 when my mum moved out after my father passed away.
I previously mentioned in an earlier post that, last season, this tree produced in excess of 500 delicious fruits, some of which are up to 1 kg in weight!! My mum told me that this fruit production had been maintained since the tree started fruiting.
After the last fruiting season, we were supposed to add new soil and fertiliser but plain forgot about it. The old house is 2 km away and we rarely popped in there - just the occasional visit to check on the empty house. 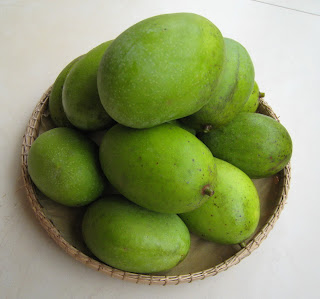 So far we have collected over a hundred kuini fruits, all weighing between 350-650 g. We started the collection late - as by the time we visited the tree, there were dozens of fruits rotting on the ground. Twice a day, we need to collect all the the ripened fruits that fell. So each morning and evening, we would drive over to the house but even then is is a battle with the small mammals like squirrels as to whether we can get to the fruits first!
The ripened kuini fruits that dropped naturally cannot keep for too long and there is no way we can eat all the fruits ourselves. So we have been distributing them, as we collect the fruits, to other family members and to our friends. They love them! 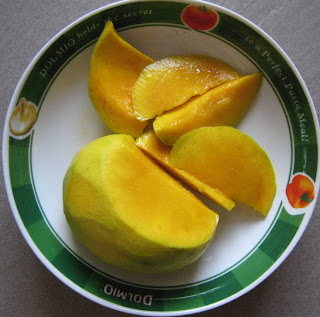 The cut fruits looks a delectable bright yellow, is super sweet and creamy (no trace of fibres). Truly the best kuini fruit we have eaten!
Posted by My Garden at 9:00 PM