Yesterday was a bright sunny day after a week of wet, wet weather - so we decided to harvest the Cat's Whiskers (we are not referring to  plucking the whiskers of our poor cats!). Cat's Whiskers is the Chinese name for a local herbal plant. This is the Orthosiphon Stamineus or more popularly known locally as Misai Kucing or  Java Tea (in Western countries). 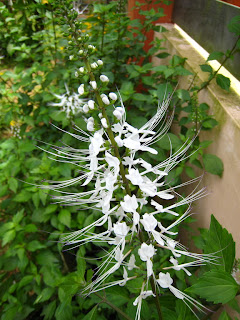 This plant is use in traditional Chinese and Malay medicines for various ailments. I am not going to go into this here - if you like to know more, just google for it.
This is about making the herbal tea. Each time we harvest one bush (we have six bushes of the plant in the garden) as we can only prepare a certain amount of tea each time.
We cut the bush down to until there was only about 15 cm (6 inches)  left of the bush stump  -  the plant will regenerate into a full bush in  about a month's time.. 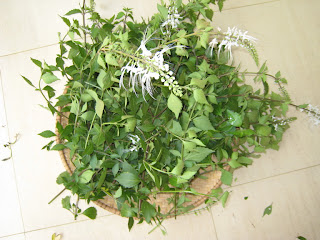 The leaves and stalks were separated and then rinsed a couple of times to get rid of the soil and dust. The leaves were then shredded and the stalks cut into small short strips.  I used a pair of very sharp secateurs for this. By lunch time, the shredded plants were ready to be placed into rattan trays to dry in the sun. The shredded Misai Kucing covered six of the round rattan trays (Sambas trays). 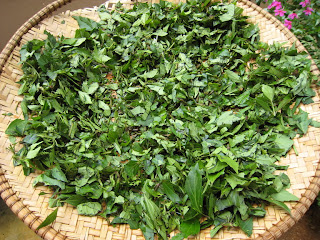 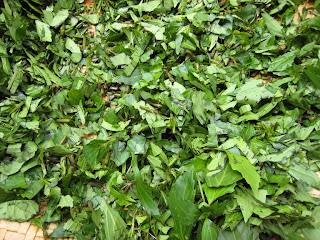 Normally, it takes about two days for the wet Misai Kucing to be dried properly. By late afternoon, the Misai Kucing tea felt dry and crisp but had to be taken in as the rain started. 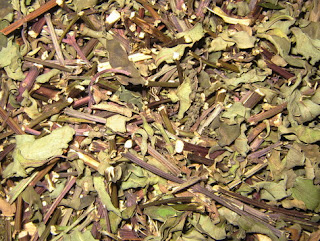 Today being a very sunny day, the trays of Misai Kucing tea were taken out into the sun again. It is probably necessary to crush the leaves a bit more. The drying process should be completed by today unless it starts raining!
After drying, the misai kucing tea is then stored in air-tight containers. Use it as normal tea leaves - it makes a very pleasant herbal drink. Beside just enjoying the tea -  it is nice to know that there are potential health benefits of drinking this tea!
Posted by My Garden at 1:21 PM